Introduction to the Eye 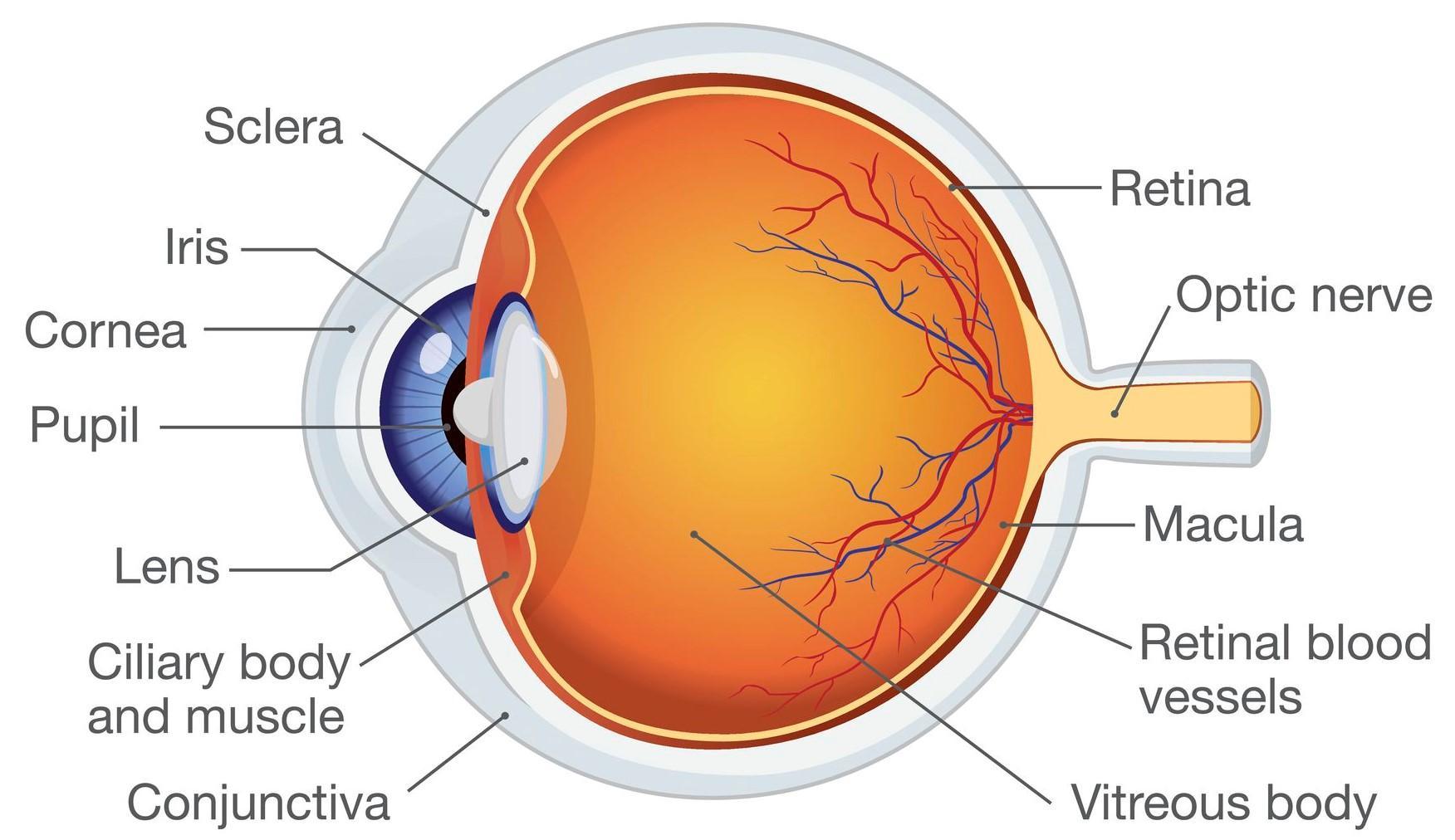 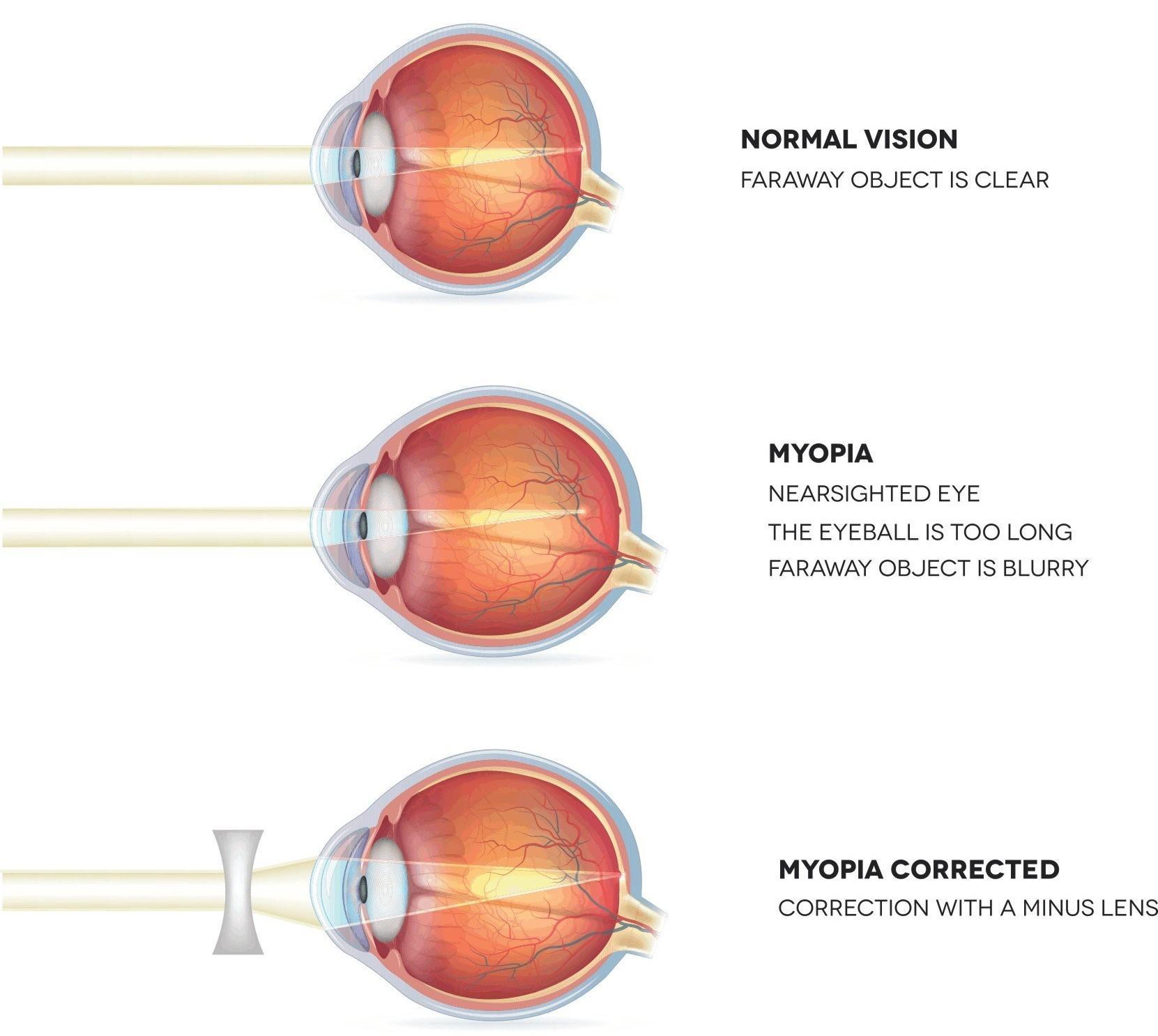 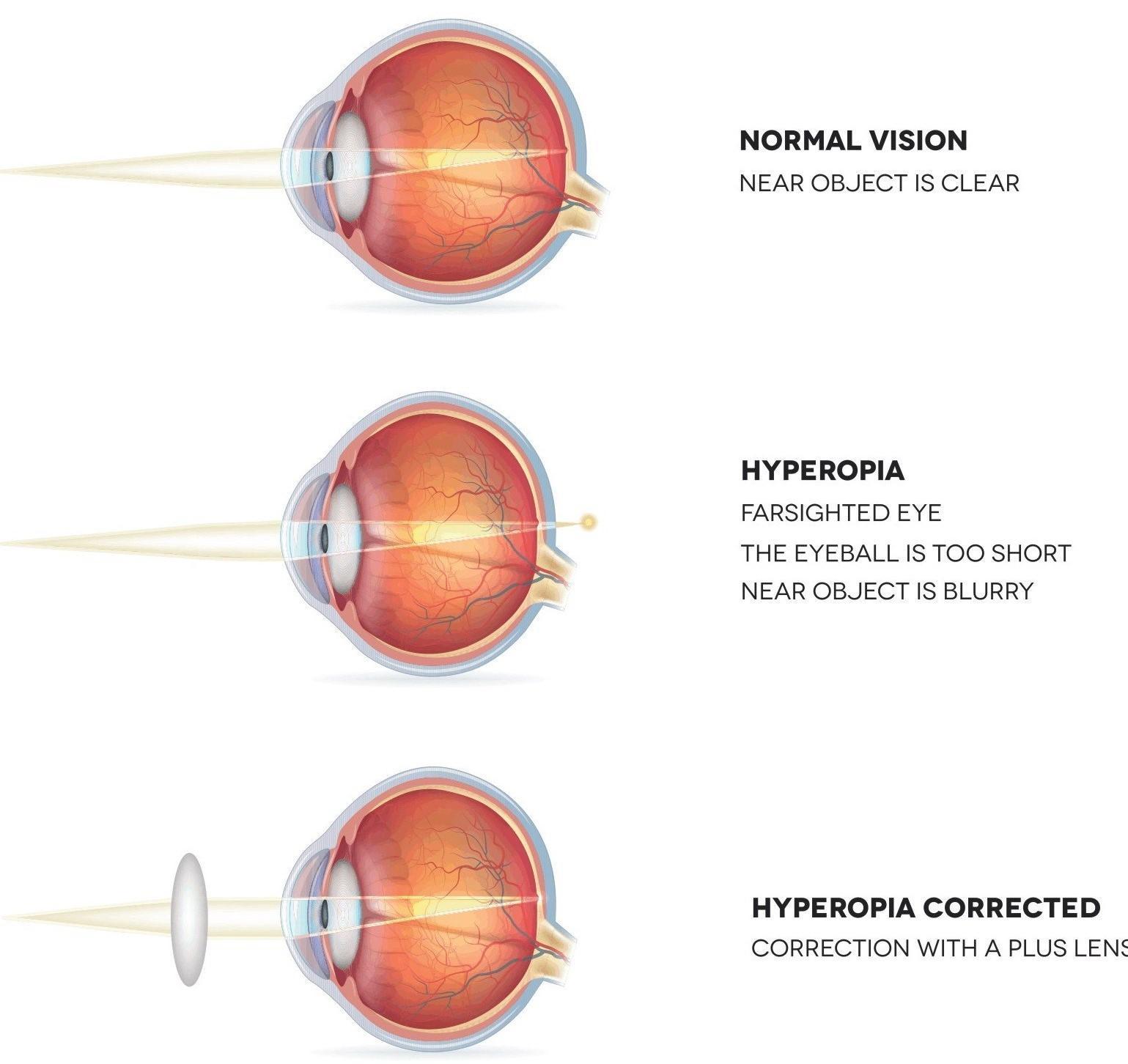 The eye is an extremely complex organ that is responsible for our highly developed sense of sight. Normally the eye has a relatively spherical shape and measures 24-25 millimeters (about 1 inch) in diameter. If the length of the eye is longer, it leads to myopia (nearsightedness), whereas if the length of the eye is shorter, it leads to hyperopia (farsightedness). For purposes of understanding, the eye can be divided into three distinct sections: the front, the middle and the back. The whole eye is called a globe, and the white portion that is visible is called the sclera. The sclera extends the entire way around the eye and is the layer of tissue responsible for the structure and support of the eye. Covering the sclera is a thin layer of tissue called the conjunctiva, which is highly susceptible to infections (conjunctivitis). 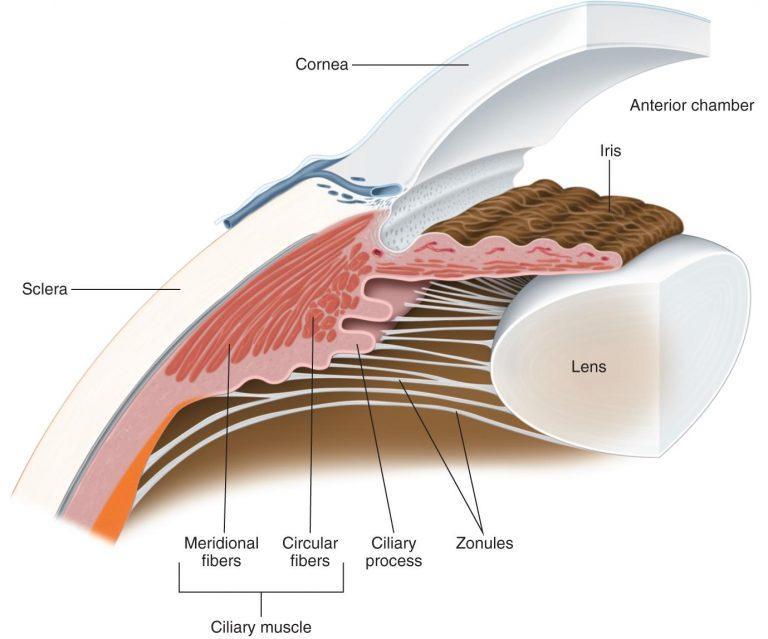 The cornea, iris and lens are the major structures of the front section of the eye. The outer-most layer on the front of the eye is called the cornea, and is mainly used as a high-powered lens to focus the light on the back of the eye. Even though the cornea is responsible for approximately 2/3 of the eyes optical power, its focus is fixed and the ability to focus on objects at different distances is accomplished by a different part of the eye. Behind the cornea is the colored part of the eye, called the iris, which acts as a diaphragm to change the amount of light entering the eye through the pupil. When a person’s eyes are dilated (either naturally or artificially with eye drops), the iris opens up, causing the pupils to become large. This allows more light into the eyes, making everything appear brighter. Behind the iris is the lens, which along with helping to focus light on the back of the eye, gives us the ability to focus on objects at different distances. Zonules attached to the lens cause it to change shape in response to visual cues, which changes the plane of focus. Without the ability of the lens to change shape, we would only be able to focus on objects at a certain distance. 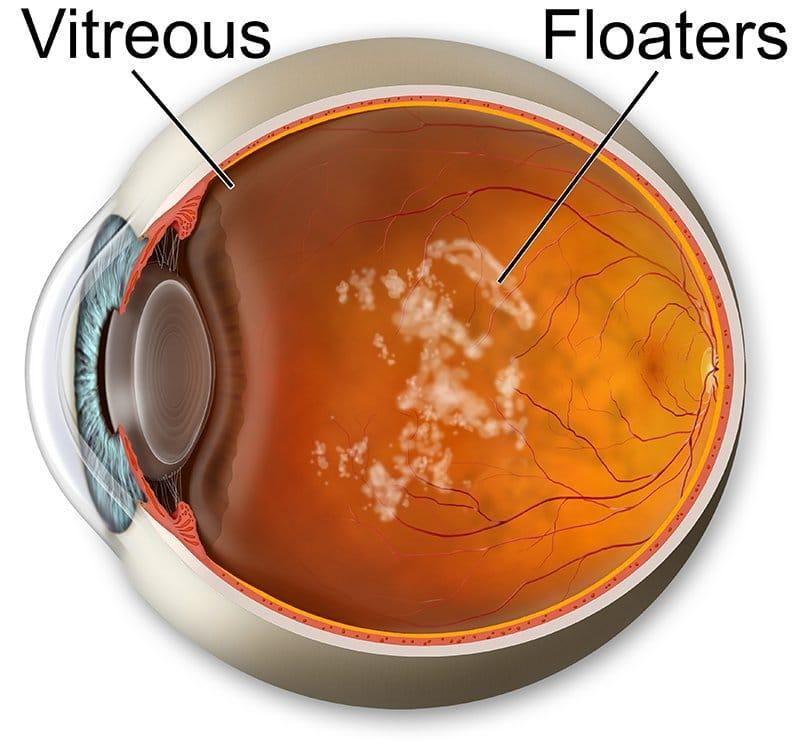 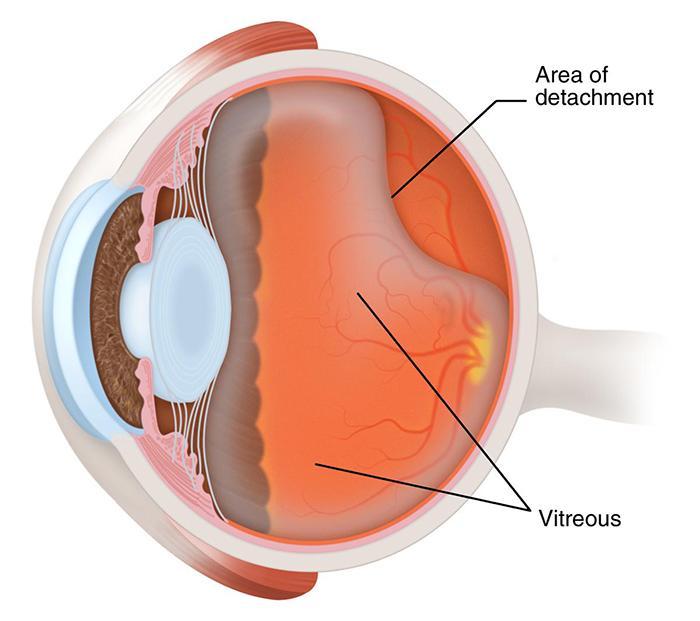 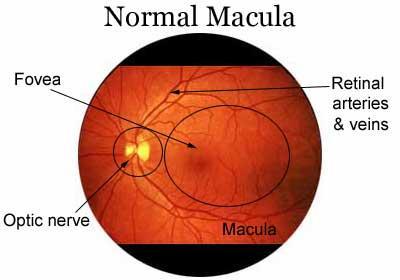 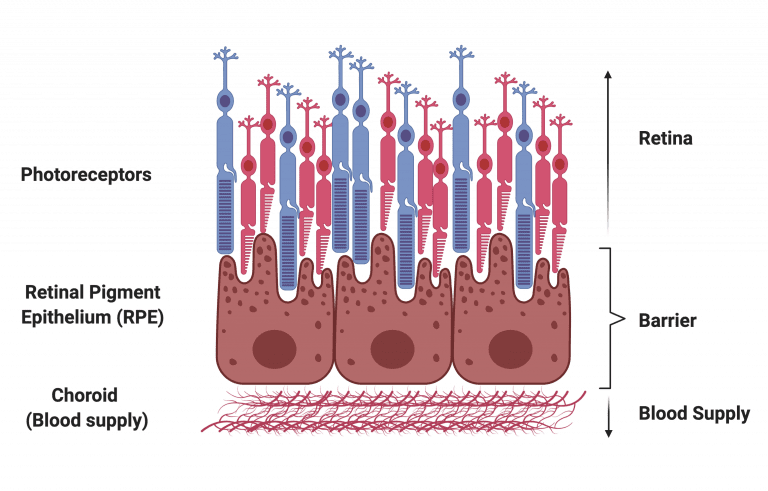 The retina and the choroid are the two major tissue layers in the back of the eye. The major anatomical features of the retina are the optic nerve, the macula and the fovea. The macula is the portion of the retina located directly behind the lens, and is responsible for our center field of vision (around 30 degrees). Within the center of the macula is the fovea, and it is from here that we get our clear, focused vision (around 10 degrees). The retina has two types of photoreactive cells (photoreceptors) called rods and cones which when stimulated by light create electrical signals. These electrical signals are sent from the retina to the optic nerve. These signals are transmitted via the 1.2 million axons of each optic nerve (total 2.4 million axons input) to the thalamus and primary visual cortex in the brain. This input from the two optic nerves is 45% of all the information that the brain gets from the rest of the body. As you can see, we are very much visual creatures. Image recognition and interpretation occur in the primary, secondary and tertiary visual cortex in the occipital and parietal lobes of the brain, which is located near the back of the skull.

Rods are located mostly in the periphery of the retina, and are less numerous within the macula. They are very sensitive to light, and are primarily responsible for our night vision. Rods are monochromatic and are unable to distinguish colors. Cones are located mostly within the fovea and macula and become less numerous towards the periphery of the retina. There are three types of cones, blue, green and red, and are responsible for color vision. They are not as sensitive to light as rods, and therefore work less efficiently at night and better in daytime. Unlike rods, cones have the ability to distinguish color and have better contrast sensitivity. Below the retina is the choroid, which is a layer of vascular tissue responsible for providing oxygen and nutrients to a majority of the retina. It also acts as connective tissue, holding the retina in place. A very thin layer, called the retinal pigment epithelial (RPE), separates the choroid from the retina, and is important in many retinal diseases. The retinal pigment epithelium acts as support cells for retinal photoreceptors. It provides the Vitamin A as retinol that is a critical part of the visual cycle. It also helps the photoreceptors shed the outersegments when they have been used in the visual cycle. When the RPE is unable to do this, these unprocessed shed outersegments accumulate under the retina as drusen. These drusen are a precursor of macular degeneration. The RPE can also atrophy in certain diseases like Dry macular degeneration, myopic macular degeneration, and solar retinopathy, and hypertrophy forming scar tissue in certain diseases like macular pucker and proliferative vitreo-retinopathy.

Diseases of the Retina There is a wide range of diseases in the retina. We have summarized them according to anatomical location of the disease and systems that are affected in the Chart of Retinal Conditions (please click here for larger size). 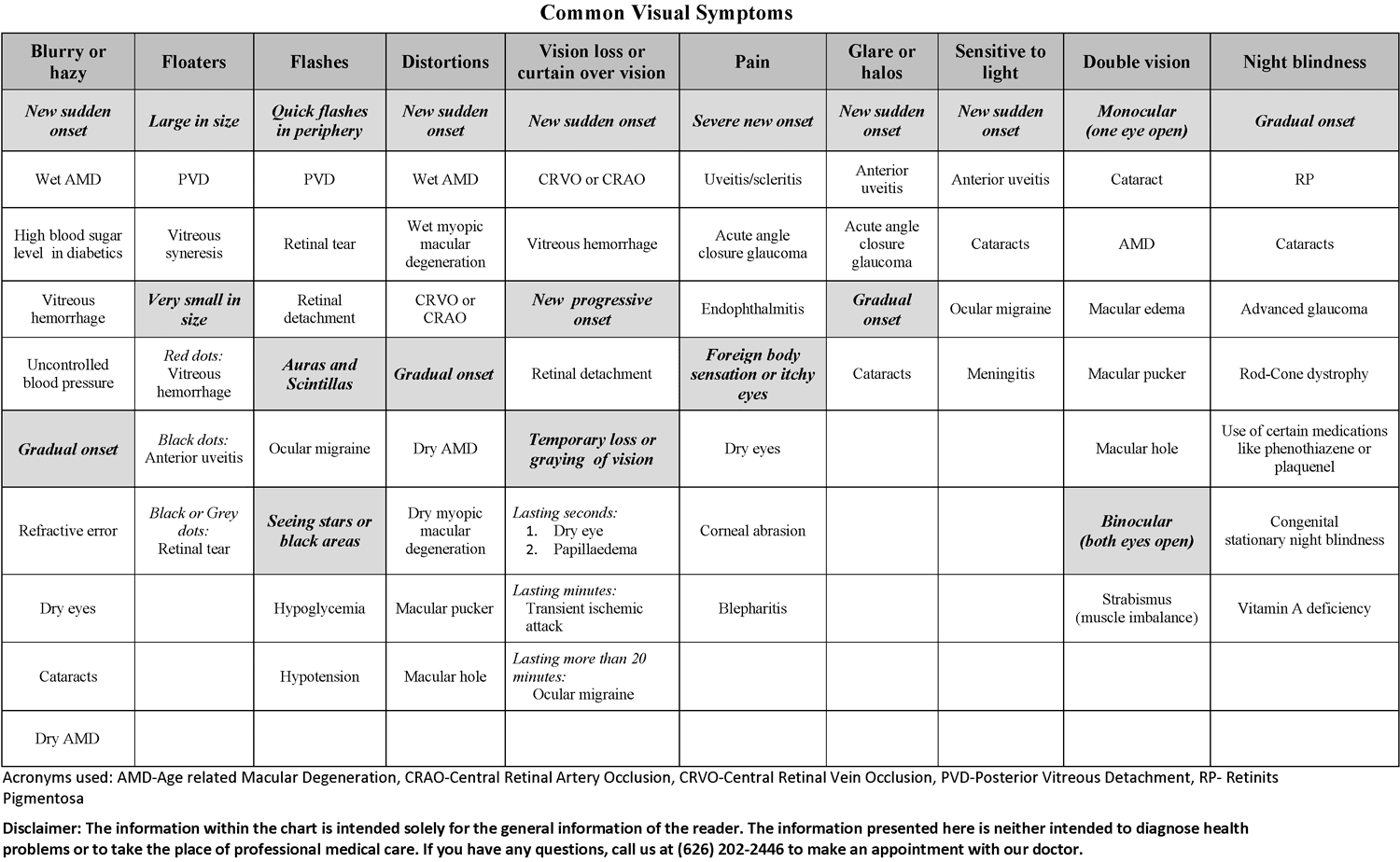 Common eye complaints, such as floaters, flashes, distortions and blurry vision may be symptoms of retinal diseases which are summarized in the Chart of Eye Symptoms (please click here for larger size). 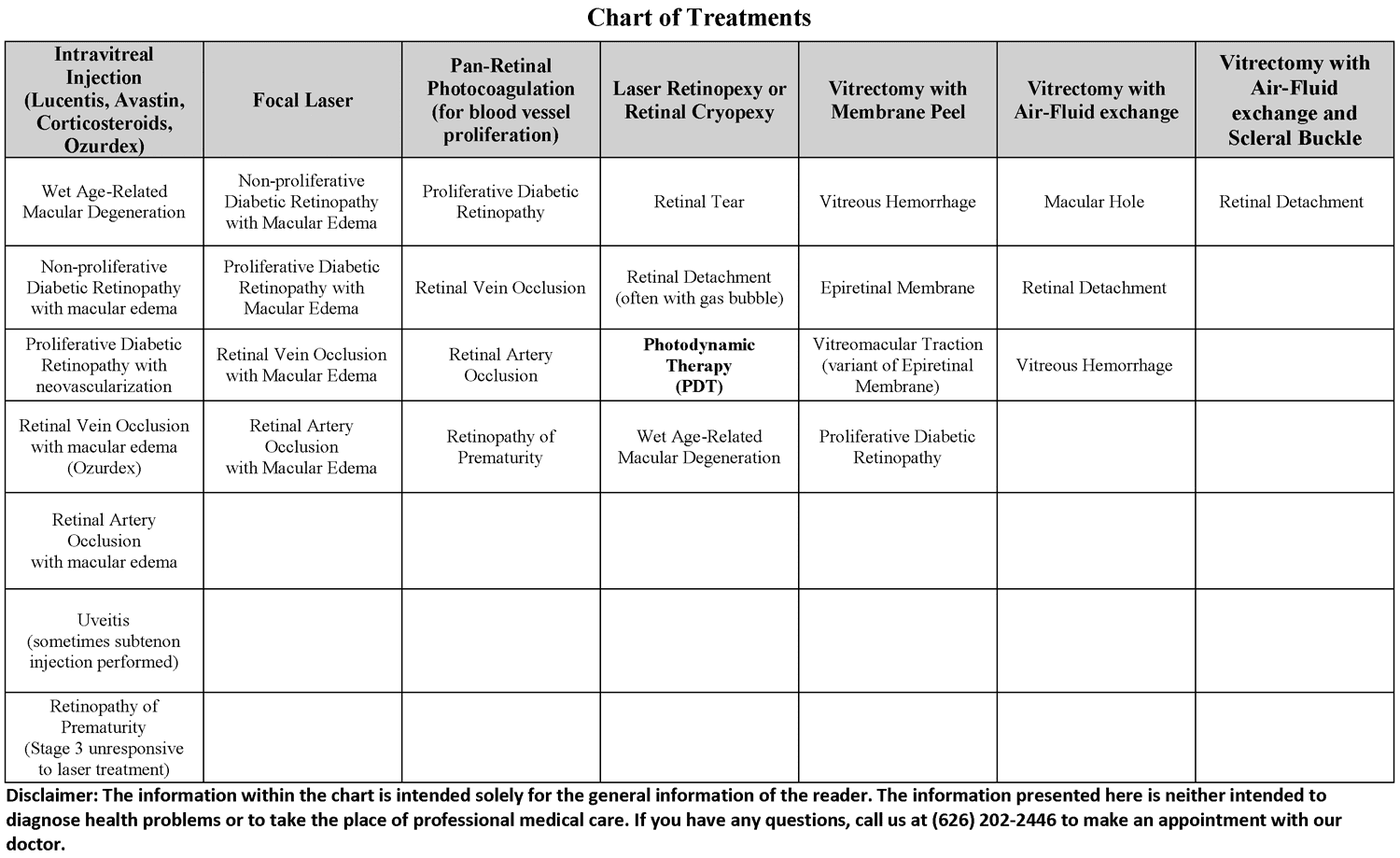 For more information regarding cause, diagnosis and treatment of common diseases of the retina, please click on the specific disease from the drop down menu or side bar.