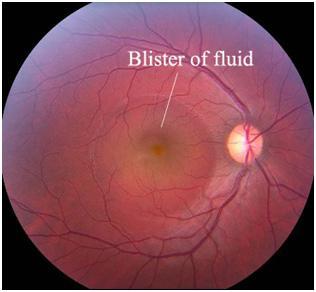 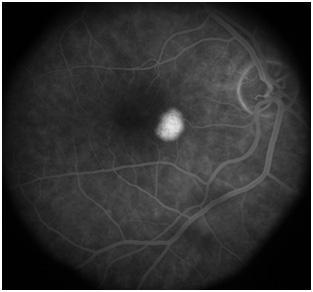 Overview:
Central Serous Chorioretinopathy (CSCR), also known as Central Serous Retinopathy or CSR, is
a condition that usually affects younger people and is characterized by a build-up of fluid
underneath the retina. The retina sits on-top of a layer called the choroid, which is what supplies
most of the retina with oxygen and nutrients. A layer of tissue called the retinal pigment
epithelium (RPE) separates the choroid from the retina and prevents the accumulation of fluid
between the two tissues.

When small breaks occur in the RPE, serous fluid (the clear part of blood) pools under the retina,
causing the retina to swell and lift off the layer below it. The cause of these breaks is unknown,
though there has been a well documented association between CSCR and stress.

Cortisol, which has been linked to CSCR, is a natural steroid that is released by the body when a
person is under stress. Artificial steroids taken orally or ointment on the skin can also cause
CSCR. Some studies have shown an association between sleep apnea and CSCR. In most cases,
the condition only occurs in one eye, though in some cases it can occur in both eyes at the same
time.

What are the risk factors?
CSCR commonly occurs in men between the ages of 25 and 50. Though CSCR predominately
occurs in males, it can also occur in females as well (a ratio 8:1). The incidence rate of CSR
within the United States is about 9.9 per 100,000 for men and about 1.7 per 100,000 for woman.
Factors that have been associated with an increased risk of developing Central Serous
Chorioretinopathy include:
1. Male
2. Age between 25-50
3. Systemic steroid use
4. Type A personality
5. Stress
6. Sleep apnea

What are the symptoms?
Some patients may have no symptoms; however, most patients complain of one or more of the
following symptoms:
1. Decreased vision
2. Distortions
3. Haze over vision
4. Objects appear smaller than normal
5. Central blind spot

Optical Coherence Tomography (OCT) is a high definition image of the retina taken by a
scanning ophthalmoscope with a resolution of 5 microns. These images can help determine
the amount of fluid under the retina and how much swelling is present. The doctor will use
OCT images to objectively document the progress of the disease throughout the course of
your treatment.

Fluorescein Angiography is a test that documents blood circulation in the retina using
fluorescein dye which luminesces under blue light. Fluorescein is injected into a vein in your
arm and digital fundus pictures are taken afterwards for 10 minutes. The pictures are used to
determine the exact point and extent of leakage.

Indocyanine Green Angiography is a test that images the choroid using infrared light. This
test is used to determine if there is any vascular abnormalities and/or leaking within the
choroid. 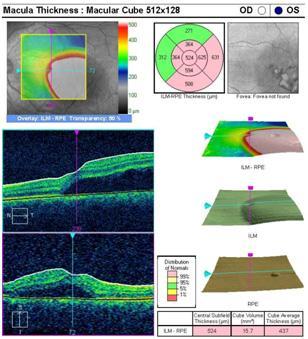 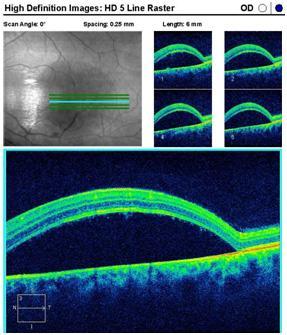 OCT image of same eye taken at a different location showing size of fluid pocket under the retina.

What treatments are available?
Central Serous Chorioretinopathy usually resolves on its own and the doctor will closely follow
you over a three month period. If the condition does not resolve during this time period or if it
affects your quality of life and daily activities, treatment may be necessary.

Photodynamic Therapy (PDT) is a treatment that uses a photoreactive dye that is activated
by a laser to seal the area of leakage. Your condition and the associated risks and benefits of
PDT will be discussed with you prior to deciding whether treatment is the proper course of
action.

What is my follow up care?
With the consent of your primary care physician, you should stop all steroid treatments, both
topically and orally. You should also reduce the amount of stress in your life. It is important to
get regular check-ups to track changes in your condition and evaluate whether treatment is
necessary for you.