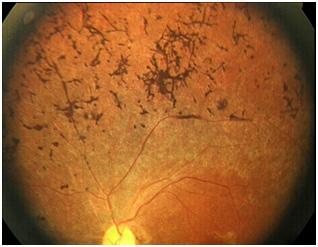 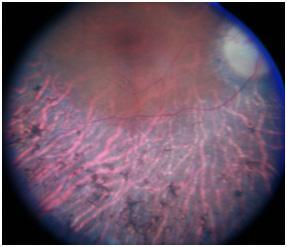 What is Retinitis Pigmentosa?
Retinitis Pigmentosa is a group of genetic eye disorders that progressively causes atrophy of the retina and typically affects both eyes. It is one of the most common forms of inherited retinal degenerative conditions, and affects 1 in 3,700 people within the United States. Typically the disease begins in childhood or early adulthood and the rate of progression varies between cases. It affects the peripheral retina first (the outer retina) and progressively moves toward the central retina. In some instances, retinitis pigmentosa progresses slowly and goes relatively unnoticed (until in later stages of the disease), with atrophying of the retina occurring over a life-span. In other cases, retinitis pigmentosa progresses quickly and can cause severe vision problems early in life.

Mutations in over 50 genes have been shown to cause retinitis pigmentosa and there are three main categories of the disease; autosomal dominant, autosomal recessive and x-linked. The main difference between recessive genes and dominant genes is that in-order to develop the disease, you need two copies (from both parents) of recessive genes, whereas you only need one copy of a dominant gene (from either parent). X-linked genes are responsible for determining gender (XX for females and XY for males). Most genes causing retinitis pigmentosa are autosomal recessive. Autosomal dominant Retinitis Pigmentosa is the least pervasive of the three, where as X-linked Retinitis Pigmentosa is the most pervasive.

Typically the first symptom of retinitis pigmentosa is night blindness. Patients with night blindness have problems seeing or are clumsy in dimly lit rooms. This occurs because the photoreceptor responsible for seeing in low-light settings (retinal rods) become damaged in retinitis pigmentosa. Loss of peripheral vision occurs as the disease progresses and can cause tunnel vision (a visual field of less than 10 degrees as measured by a Humphrey visual field test). In the late stage of the disease, central vision can start to decrease, typically to 20/200 or below.

What are the Symptoms?
If the disease progress is slow, some patients may not notice any symptoms or may not realize that there have been any changes in their vision. Common symptoms of retinitis pigmentosa include:
1. Night Blindness
2. Loss of peripheral vision (tunnel vision)
3. Loss of central vision (in later stages) 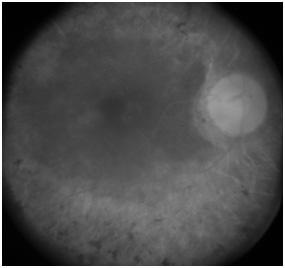 Fluorescein Angiography showing staining of the RPE as a result of hypertrophy and atrophy. 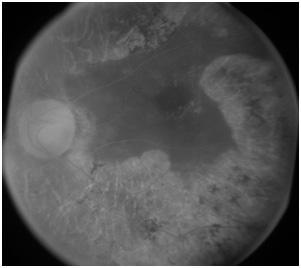 Optical Coherence Tomography (OCT) is a high definition image of the retina taken by a scanning ophthalmoscope with a resolution of 5 microns. The doctor can use these images to objectively determine the amount of atrophy within the retina and to detect changes that occur between visits.

Humphry Visual Field is a test that documents the amount of peripheral vision a person has, and is performed individually for each eye. The eye not being tested is covered so that you are unable to see with it. With the eye that is being tested, the technician will ask you to look into the machine and fixate on a point in the center. During the test, you will push a button each time you see a flashing light. It is important that the eye being tested remains fixated on the point straight ahead through-out the test. If you move your eye around during the test, the results will be inaccurate and the test will have to be repeated.

Genetic Testing for 300 genes of inherited retinal disease can be done. With a simple spit sample, Spark Therapeutics and Invitae testing can be sent off from our office. As gene therapy becomes more available, it would be important to know which specific gene defect caused the disease. 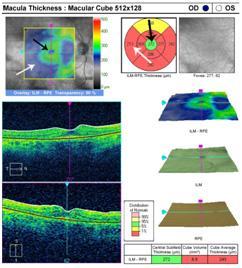 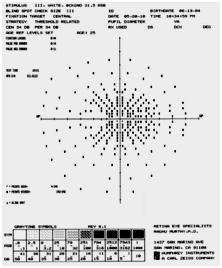 Treatments in the future:
Retinal Chip: For the past 10 years, researchers have been working on a way of implanting a CMOS chip (like that in a digital camera) in the back of the eye. With new breakthroughs in nanotechnology, progress on the chip has accelerated quickly and a third generation chip (the Argus III) is almost ready to be tested. While the first generation (the Argus I) chip only provided 16 pixels of resolution, the Argus III will provide over 200 pixels of resolution. It is projected that when developed, the Argus V will provide near 1000 pixels of resolution, which is the number of pixels required for face recognition. Though great strides are being made in retina chip technology, it will be several years before this treatment is available to the public.

What is my follow up care?
Regular visits with us our recommended so that the progress of the disease can be closely monitored. Here is a summary:
1. High doses of vitamin A (15,000 IU per day)
2. Addition on Omega-3 (1,200 mg per day)
3. Addition of Lutein (12 mg per day) if midperiphery vision is still present
4. Obtain genetic testing and counseling with us

National Eye Institute (2008). Update on Vitamin A as a treatment for Retinitis Pigmentosa.
Accessed from http://www.nei.nih.gov/news/statements/pigmentosa.asp