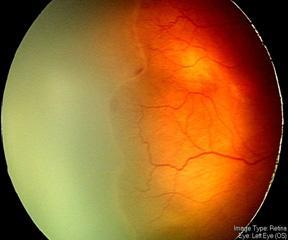 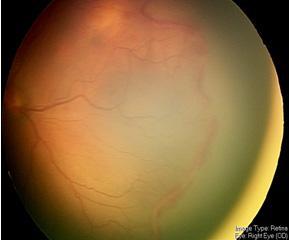 What is ROP and what causes it?
Retinopathy of Prematurity (ROP) is a retinal condition that affects premature infants who usually are under a birth weight of 1,500 grams and/or have a gestational age (time at when they were born) of 32 weeks or less (normal gestational age is 38-43 weeks). The retina is the back portion of the eye which captures light and sends signals to the brain, creating the ability to see. A tiny, highly complex system of blood vessels supply the retina with oxygen and nutrients and these blood vessels begin to develop at 16-18 weeks after conception, with full maturity occurring prior to normal birth. Premature birth disrupts the development of the retina vasculature and leaves some of the retina without blood vessels, which causes an anatomical and physiological change within the eye. Oxygen levels play an important role in the normal formation of retinal blood vessels and in the development of Retinopathy of Prematurity.

When a baby is in the womb, oxygen saturation in the blood is around 80%. This relatively low oxygen level signals the retina to grow new blood vessels and is essential for the normal development of the vascular network. When a baby is born at full gestation, the lungs are fully developed and the oxygen saturation level is 96%-100%. This higher oxygen level arrests blood vessel growth within the fully mature retinal vasculature. When a baby is born prematurely, often they are put on a ventilator since the lungs are typically underdeveloped. This raises the oxygen saturation above 90%, which arrests retinal vascular growth. In premature babies, the retinal vascular network is not fully developed and creates an area of avascular (no blood vessels) tissue. A ridge is visibly noticeable at the boundary between the vascularized tissue and avascular tissue and can be easily seen during an exam or on pictures of the retina (see above). The area of the retina without any blood vessels still has a demand for oxygen and nutrients, thus releasing a hormone called Vascular Endothelial Growth Factor (VEG-F) to stimulate the growth of new blood vessels to that area. However, because normal development was interrupted, the new blood vessels will grow without direction and are unable to cross the ridge between the vascular and avascular tissue. These abnormal new blood vessels tend to be very fragile and often leak into either the retina, the vitreous (the jelly like substance that fills the eye) or both. When this occurs, urgent treatment is needed.

How common is ROP and who should be screened?
Since ROP only affects premature infants, it is a fairly uncommon disease within the population of the United States. However, of all the infants born prematurely, around 17% of them will develop ROP to some extent. It is important to note that the lower the birth weight and/or gestational age, the higher the risk of ROP forming. According to statistics from 2009 released by the National Eye Institute, around 16,000 premature infants develop ROP each year. Within the United States, ROP is the second leading cause of blindness in infants, with 600 becoming blind each year. It is the standard of care to screen all premature infants who: 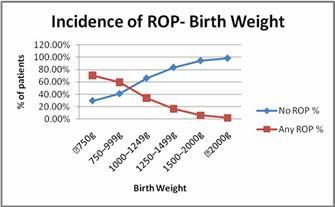 Graph showing association between birth weight and incidence of ROP 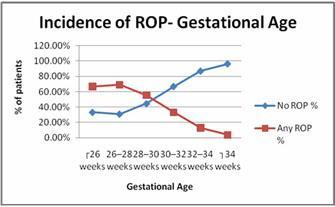 Graph showing association between gestational age and incidence of ROP

How is ROP diagnosed?
The doctor will perform a dilated exam with an indirect ophthalmoscope to determine the stage and what part of the retina is affected by ROP. To minimize discomfort, several numbing drops will be placed in the eye immediately before the exam. If there are any suspicious looking vessels or leakage within the retina, the doctor will perform a Fluorescein Angiogram to determine the extent of the ROP.

Fluorescein Angiography is a test that documents blood circulation in the retina using fluorescein dye which luminesces under blue light. Fluorescein is injected into a vein using an IV line and digital fundus pictures are taken afterwards for around 5 minutes. These pictures show the exact location and extent of leakage and if there are any abnormal blood vessels present. The doctor will explain these pictures to you in more detail. 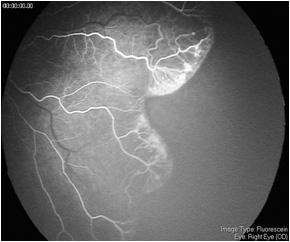 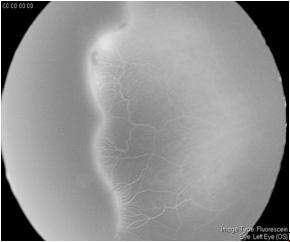 How is ROP classified?
ROP is classified along three catagories: zone, stage, and presence of plus disease. 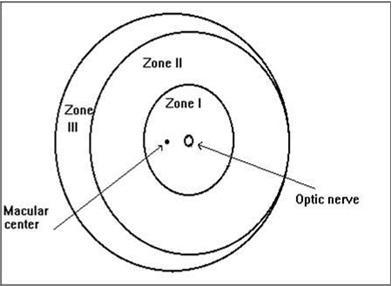 Refers to the clinical appearance at the vascular/avascular junction. There are 5 stages: 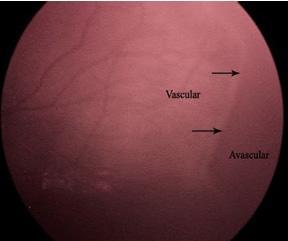 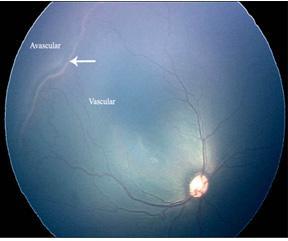 Plus disease:
Plus disease describes the presence of venous dilation and arteriolar tortuosity within the retina. Plus disease can occur at any stage and usually indicates that the ROP is increasing in severity. The presence of plus disease is usually associated with generally poorer outcomes. 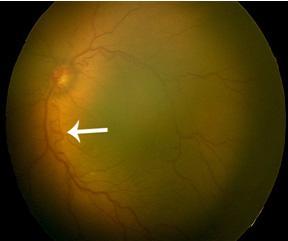 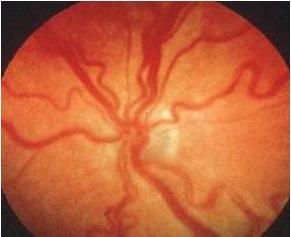 How is ROP treated?
The best treatment is prevention. A growing body of evidence is showing that in low gestational aged infants, the use of low oxygen levels (82-92%) during the first several weeks after birth decreases the risk of ROP. The cut-off for what gestational age low oxygen levels should be used is still being debated, however around 32 weeks seems to the most accepted age as of now. Some studies have reported that increasing the oxygen saturation after the first several weeks also helps reduce the risk of ROP, though these studies are less conclusive. The use of low oxygen saturation early after birth and higher oxygen saturation later, and when exactly they should be used requires more study. If ROP progresses to the point of requiring treatment, several options are available. 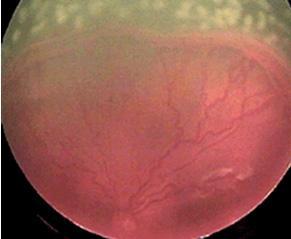 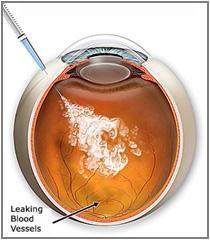